S. Hawking & L. Mlodinow "God, Science and the Origins of the Universe" 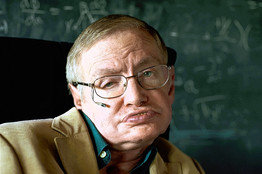 Ignorance of nature's ways led people in ancient times to postulate many myths in an effort to make sense of their world. But eventually, people turned to philosophy, that is, to the use of reason—with a good dose of intuition—to decipher their universe. Today we use reason, mathematics and experimental test—in other words, modern science.


Ignorance of nature's ways led people in ancient times to invent gods to lord it over every aspect of human life. There were gods of love and war; of the sun, earth, and sky; of the oceans and rivers; of rain and thunderstorms; even of earthquakes and volcanoes. When the gods were pleased, mankind was treated to good weather, peace, and freedom from natural disaster and disease. When they were displeased, there came drought, war, pestilence, and epidemics. Since the connection of cause and effect in nature was invisible to their eyes, these gods appeared inscrutable, and people at their mercy. But with Thales of Miletus (ca. 624 BC-ca. 546 BC) about 2,600 years ago, that began to change. The idea arose that nature follows consistent principles that could be deciphered. And so began the long process of replacing the notion of the reign of gods with the concept of a universe that is governed by laws of nature, and created according to a blueprint we could someday learn to read.


38The point is that Buddhahood, Enlightenment, cannot be communicated but only the way to Enlightenment. This doctrine of the incommunicability of the Truth beyond names and forms is basic to the great Oriental, as well as to the Platonic, traditions. Whereas the truths of science are communicable, being demonstrable hypotheses rationally founded on observable facts, ritual, mythology and metaphysics are but guides to the brink of a transcendent illumination, the final step to which must be taken by each in his own silent experience. Hence one of the Sanskrit terms for sage is muni, 'the silent one'. Sakyamuni (one of the titles of Gautama Buddha) means 'the silent one or sage (muni) of the Sakya clan'. Though he is the founder of a widely taught world religion, the ultimate core of his doctrine remains concealed, necessarily, in silence.


— Kimura Kyūho, On the Mysteries of Swordsmanship, ca. 1768

“Everything written symbols can say has already passed by. They are like tracks left by animals. That is why the masters of meditation refuse to accept that writings are final. The aim is to reach true being by means of those tracks, those letters, those signs — but reality itself is not a sign, and it leaves no tracks. It doesn’t come to us by way of letters or words. We can go toward it, by following those words and letters back to what they came from. But so long as we are preoccupied with symbols, theories, and opinions, we fail to reach the principle.”

“But when we give up symbols and opinions, aren’t we left in the utter nothingness of being?”