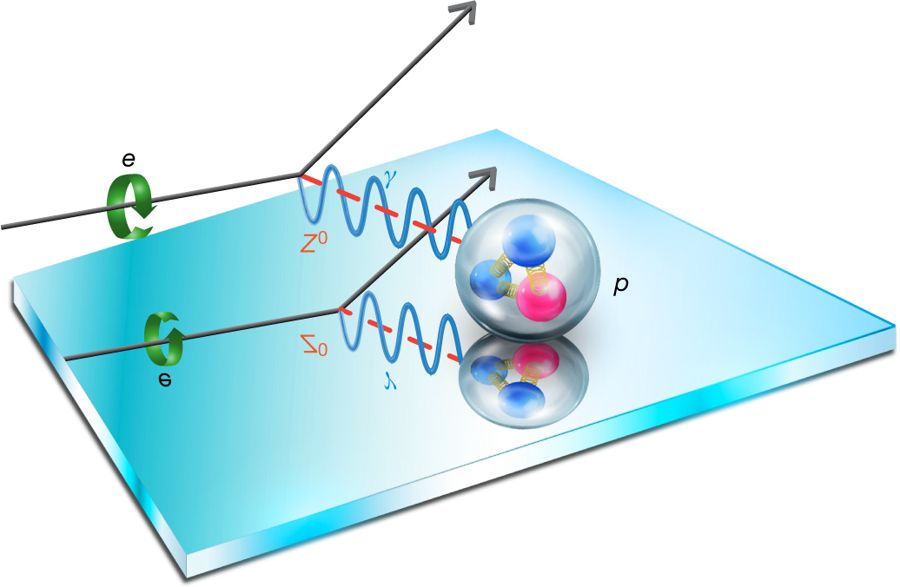 Precision measurement of the weak charge of the proton

Large experimental programmes in the fields of nuclear and particle physics search for evidence of physics beyond that explained by current theories. The observation of the Higgs boson completed the set of particles predicted by the standard model, which currently provides the best description of fundamental particles and forces. However, this theory’s limitations include a failure to predict fundamental parameters, such as the mass of the Higgs boson, and the inability to account for dark matter and energy, gravity, and the matter–antimatter asymmetry in the Universe, among other phenomena. These limitations have inspired searches for physics beyond the standard model in the post-Higgs era through the direct production of additional particles at high-energy accelerators, which have so far been unsuccessful. Examples include searches for supersymmetric particles, which connect bosons (integer-spin particles) with fermions (half-integer-spin particles), and for leptoquarks, which mix the fundamental quarks with leptons. Alternatively, indirect searches using precise measurements of well predicted standard-model observables allow highly targeted alternative tests for physics beyond the standard model because they can reach mass and energy scales beyond those directly accessible by today’s high-energy accelerators. Such an indirect search aims to determine the weak charge of the proton, which defines the strength of the proton’s interaction with other particles via the well known neutral electroweak force. Because parity symmetry (invariance under the spatial inversion (x, y, z) → (−x, −y, −z)) is violated only in the weak interaction, it provides a tool with which to isolate the weak interaction and thus to measure the proton’s weak charge1. Here we report the value 0.0719 ± 0.0045, where the uncertainty is one standard deviation, derived from our measured parity-violating asymmetry in the scattering of polarized electrons on protons, which is −226.5 ± 9.3 parts per billion (the uncertainty is one standard deviation). Our value for the proton’s weak charge is in excellent agreement with the standard model2 and sets multi-teraelectronvolt-scale constraints on any semi-leptonic parity-violating physics not described within the standard model. Our results show that precision parity-violating measurements enable searches for physics beyond the standard model that can compete with direct searches at high-energy accelerators and, together with astronomical observations, can provide fertile approaches to probing higher mass scales.